Kate Lansing’s Latest Releases in May 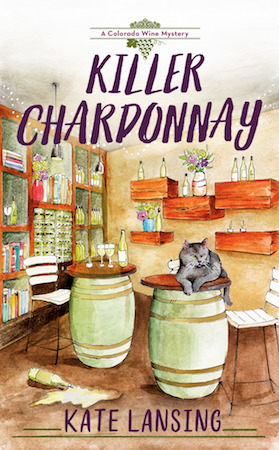 A young winery owner won’t let one sour grape ruin the bunch in the first installment of this exciting cozy mystery series.

Parker Valentine has always dreamed of opening her own winery in her hometown of Boulder, Colorado. But she gets more than she bargained for when a food and wine critic unexpectedly shows up at Vino Valentine on opening day. A negative review could be fatal for her business, and not only does he seem to hate her chardonnay, he also collapses and dies shortly after drinking it.

Although Parker hoped that the attendees would put a cork in it, soon her winery is at the center of a social media firestorm. With #killerchardonnay trending online, Parker’s business is in danger of closing, and she has no choice but to investigate the murder herself.

To restore her reputation, catch a killer, and keep her struggling business open, Parker needs only one thing: some good proof.