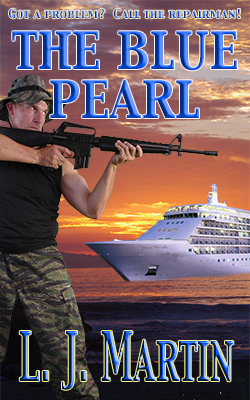 The Blue Pearl by L.J. Martin will be released on 10/23/19.
There’s nothing like a relaxing cruise to reinvigorate tired bones…soak up the sun, lots of drinks with those little umbrellas, a little body-guarding. What could go wrong? That is, until Al Shabaab decides a hundred American women would be worth a C130 full of gold. From the sea to the Sahara, from a cruise to a crusade, Mike Reardon should have known he’d end up downrange in the sights of bloodthirsty suicidal terrorists. And it’s not bad enough they’ve taken his new friends, but they’ve ripped away the young singing sensation he’s paid to guard and his new girl—now it’s personal. It’s time to get serious. From London to Lisbon to the Mediterranean it’s smooth sailing, but Algeria and Libya is another thing altogether. While the White House and State Department negotiate, Reardon retaliates. Lead flies, and Mike vows to come back with the women, or not at all.